UK rail maintenance company MTMS has strengthened its defences to safeguard its staff and customers against the rising tide of online crime by gaining the coveted Cyber Essentials Plus certificate.

The firm, which is based in Swadlincote, Derbyshire, but operates across the country, has become the latest UK company to have been awarded Government-backed accreditation, which was introduced to help companies protect themselves against common cyberattack approaches such as phishing emails and ransomware.

Inevitably, the rail industry is also potentially vulnerable to such attacks, including one incident when Northern Rail’s new self-service ticket machines suffered a suspected ransomware attack last year, leading to them having to be taken offline.

MTMS gained its Cyber Essentials basic level accreditation earlier this year and, in a bid to further protect its systems and prove its security when bidding for future work, it invited an auditor in last month as part of the requirements for PLUS.

The visit involved staff interviews and an extensive examination of its IT systems and equipment, from its firewall and internet gateways right down to work laptops and mobile devices.

With the exception of one or two minor points, MTMS passed the test with flying colours and can now declare its customer data and internal systems fully protected against any online attacks in the future.

Lee Hampton, the company’s head of marketing and systems at MTMS, said: “With data and information having become so valuable and the potential for hackers to bring an organisation to a standstill, it’s no wonder that cybercrime is one of the biggest threats any company faces in today’s world.

“In the rail industry we are no different and although it is a significant undertaking, we felt it was of paramount importance for us to demonstrate to our current clients and future customers that we have gold-plated IT defence systems in place.

“We’re delighted to have earned our Cyber Essentials PLUS accreditation and would call on the rest of the industry to invest time and effort into proactively ensuring that their own systems are protected against a cyberattack before it’s too late.” 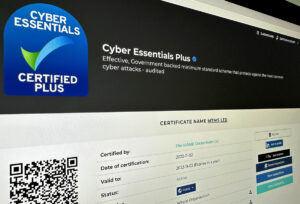 Picture shows: UK rail maintenance company MTMS has strengthened its IT defences against the rising tide of online crime by gaining the coveted Cyber Essentials Plus certificate.

This press release was distributed by Penguin PR. To find out more contact Simon Burch on 07735 397888 or by email at simon@penguinpr.co.uk